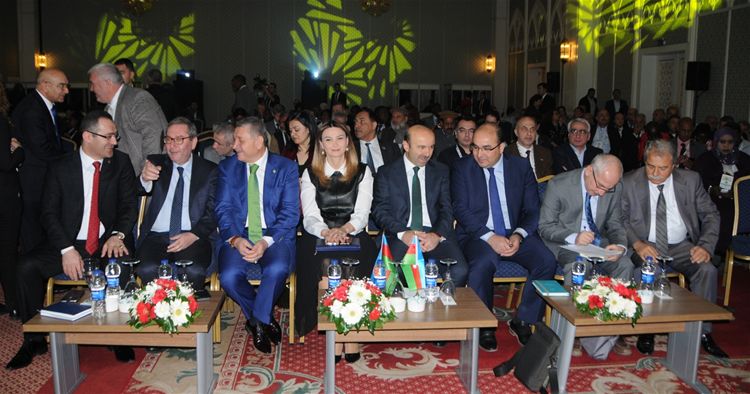 In the first panel entitled as “Democracy and Coups” of the International Congress of Democracy, the opening speech of which was delivered by Harun Tüfekçi, the Deputy Minister of Forestry and Water Affairs; Dr. Murat Yılmaz, Talat Enveroviç, Prof. Dr. Mehmet Şahin, Ganire Paşayeva and Ardan Zentürk took the stage for their speeches.
07.03.2017 00:00

The panel sessions of International Congress of Democracy entitled as “July 15 –Global Chess” organized by Öz Orman-İş Trade Union which witnessed a spectacular opening ceremony with the participation of the Prime Minister, Binali Yıldırım turned out to be high-level opinion platform with international participation.

In such panels held in four sessions in MeyraPalas Hotel in March 3 and 4,around 150 guests from 43 countries as well asmany local guests attended in.Further to the introductory speech of the Leader,Settar Aslan, Harun Tüfekçi, the DeputyMinister of Forestry and Water Affairs made an opening speech in thesession of “Democracy and Coups”.Deputy Minister Tüfekçi, in his speechaddressing the series of anti-democratic interventions going on for 140 yearsin Turkey and the damages of such inflicted upon the Turkish democracy, statedthat the country’s economy has grown during terms of stability and such growth hitthe bottom during terms of coups and coalitions.

A political scientist, Dr. Murat Yılmaz who actedas the moderator of the panel, having referred to the words of Imam Al-Shafi’i“behold where the foe’s arrows lead towhen choosing your friends at times of instigation”,drew attention to thehostile campaigns against Turkey. Dr. Yılmaz, telling that FETO terroristorganization is trying to neutralize the state by stealthily infiltrating intothe strategic institutions of the state, and that the fight must be waged to goto any lengths with this organization. Dr. Murat Yılmaz further stated that despiteTurkey’s comprehensive fight against DAESH, the international forces are doingtheir best to instigate a perception as though Turkey is and has beensupporting DAESH and such is manipulated to be used as a justification for thecoup attemptand added that “Whatever theydo, the Turkish Spring and Arab Spring are destined to be successful. July 15is the prologue of such success.”

Talat Enveroviç Çetin, the Vice President ofNational Security Academy of Russian Federation, who took stage for his speechduring the panel said that “Turkey has saved the east of the world on July 15.This event shall go down in history as the last attack of the West on the East”.Enveroviçbriefly summarized as follows:

“The plotters havingconceived July 15 targeted on dividing Turkey and in turn, jumping out toRussian and Central Asia. Russia, despite provocations like the assassinationof Russian Ambassador, has thwarted such plot with Turkey”.

“PRESIDENCY IS MADE OFTURKEY”

Talat Enveroviç, stating that the “PresidencyGovernment System” to be voted on April 16 is “made of Turkey” and “belongsto Turks”, “Turks had been governedby presidency during their 5 thousand old history. I do not subscribe to pointof view that such model is imported. Likewise the game of chess, the Presidencyis an inherent model exclusive to Turks.”

“COUP PLOTTERS MUSTTAKE INTO ACCOUNT THE BAGEL SELLER ON THE STREET”

One of the speakers, Prof. Dr. Mehmet Şahin,Gazi University lecturer, expressing that Turkey witnessed a coup attempt on July15, the plotters of which have Turkish “Type”,but a foreign “Chip”, went on asfollows:

“If there are peoplelaying themselves down in front of tanks, the academics should also dare totell directly and frankly the realities.Unfortunately, we have witnessed thatsuccess is viable and successful in coups plotted in the Middle East.Supportingcoups in this geography gives a boost for radical groups like ISIL to growstronger.Those attempting any coup took courage from the success of the coupsschemed in the Middle East.Whenever the people had a voice, that is when a coupis schemed. However, those aspiring for any coup from now onward must take intoaccount the bagel seller on the street.Coup perpetrators look like us, butthose opposing it come from every segment of the community. Thus, I have takendecision not to approach anyone with any prejudice”

“ AN ENEMY  OF TURKEY IS ALSO AN ENEMY OF AZERBAIJAN”

Paşayeva expressed her opinions as follows,reminding of the fact that Azerbaijan Turks, especially Azerbaijan PresidentIlham Aliyev, condemned the coup attempt from the first moments of the coup andhad an attitude against the perpetrators, added that:

“Because, the enemiesof Turkey are also the enemies of Azerbaijan. The enemies of Azerbaijan on theother side are also enemies  of theTurkey and the world of Islam.Standing by Turkey in any unfavorable attempt is ourliability toward Turkey. July 15 was a coup attempt against the civil will ofthe country. We have witnessed what might lay behind the coup.We are hand inhand with our friends.We shall not keep silent in such days and support eachother. Otherwise, what happens to one of us today may happen to the other inthe future”.

Ardan Zentürk, the author of Star Daily, statingthat the fact that the coup attempt on July 15 was schemed by the imperialistpowers was substantiated by the bomb dropped on TBMM, continued his speech as “Because, the imperialist powers has beenand is still hating TBMM which represents our national will. TBMM had been amodel for all colonized nations as a symbol of battle of this nation againstimperialism”.

Stating nothing is coincidental or happens perse, Zentürk briefly went on as follows:

“When they attacked uswith the heaviest weapons on July 15, our youngsters who were at a loss upuntil such moment, suddenly risked their lives in front of tanks.Such attitudehas roots in history and is the continuation of heroic saga of our ancestors. Fromthe initial moments when the whereabouts of our President was unknown, ouryoungsters and people started their opposition against the coup. Back then, Isaid to my program editor that we have a historic reckoning today, we willeither perish or be home and dry.May Gold help us.I want to underline an importantfact: That night, millions of people took to the streets. Afterwards, millionsof people kept watch and ward in the squares until the early hours of morningfor about 1 month. But we witnessed not any incident of any vandalism.This is agreat pride.”