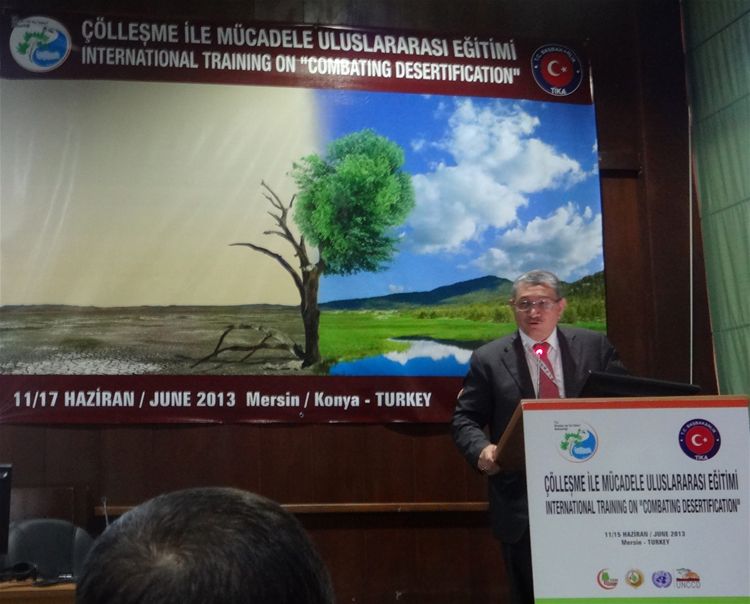 FOREST QUOLITY PLAYS A VITAL ROLE FOR THE DEVELOPMENT

On the Combating Desertification and Erosion convention, president Settar ASLAN mentioned in his presentation: “İt would be appropriate to include the quantity and quality of forests as a criteria for the development of countries.”
20.06.2013 00:00

He made a presentation about the public employers organising in sivil society organizations and the structure of Turkey trade unions.

He continued his speeches giving detailed information about the concept of Hak-İş Confederation and Öz Orman-İş trade unionism on june, 11 2013.

He also added “Within the perception of this approach, reconciliation has a vital role in working life of trade unions of Hak-İş.’’

He stressed the importance of international solidarity due to the capital globalization and continued “Our confederation and the affiliated unions give vital importance to international relations. We not only develop our West world labour union relations, but also have interactions and aim to make liasions with Middle East, Central Asia and African countries. We have bilateral cooperations in the same branch with Azerbaijan, Egypt and Uganda and have contacts with Jordan, Nigeria, Taiwan and Kyrgyzstan.”

In his presentation he explained the organising structure of agriculture-forestry sector of Öz Orman-İş and emphasized the importance of forestry and environment on humanbeing future.

“Forests and water resources are the common value of all humanity. We should not only posses the forests but also benefit socially and culturely. In this point, our worker amount should be increased and working period must be up to 12 months.”

Ask God if you wish

Do not go away from soil to take away

Black soil is my all loyal love

51 experts from 27 African and Asian countries and many experts and bureaucrats from Turkey attended ‘International Combating Desertificationand  Erosion education Seminar’.